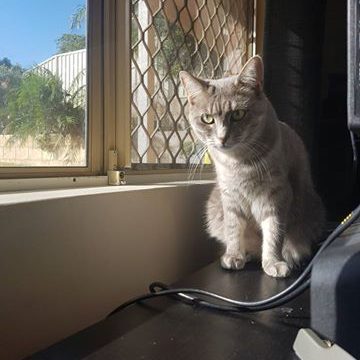 Tinka, IFR’s first foster cat, was a shy, undomesticated grey tabby female. She arrived in foster care with kittens, but while the babies got adopted quickly, Tinka remained in care.

Tinka started as an Armadale Community Animal Rescue Group cat and later transferred to IFR. Despite her shy start in life, Tinka later realised it was okay to be friendly with her foster carer. She became quite the couch potato!

Later in her life, Tinka’s foster carer planned to adopt her, but sadly Tinka escaped from her foster home before that could happen.

If wishes were wings, Tinka’s foster journey would have ended differently. Now that she is around nine years old, we hope she has found a new and loving home to enjoy the rest of her days.