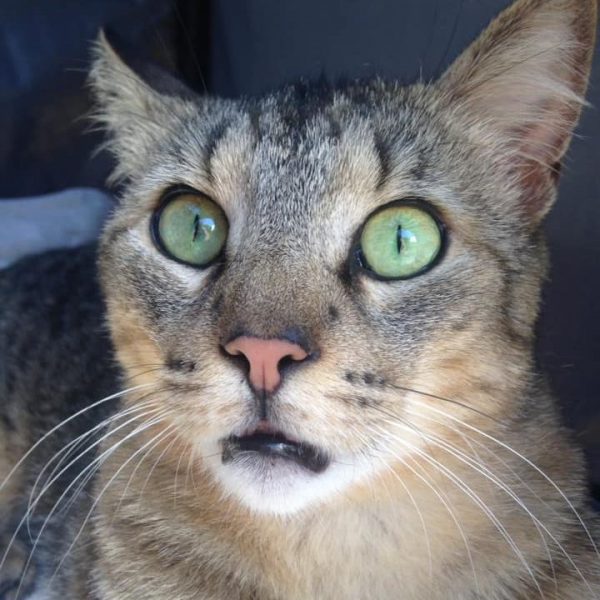 This little guy first arrived in our care at the age of around 5 months, in 2017. He was originally trapped at a car wrecking yard approximately one year ago. We eventually found out that he has a diaphragmatic hernia which most likely resulted from some sort of trauma prior to rescue. This condition means that he isn’t able to be sterilised, so instead he is given a periodical treatment to suppress his hormones. He isn’t adoptable.

Colin is a lover of life, and until we notice any changes in his temperament that indicate he’s not feeling well, he will continue to love his life as a forever foster kitty.

Colin can be a bit of a punk sometimes, but he’s a loveable punk. In truth, we weren’t sure he would last as long as he has, and we still don’t know how long he’ll be with us. Currently he’s showing no signs of slowing down, and as he gets older, he seems to handle his hernia better than when he was all tiny!

His foster mum tells us about how he likes to say “wow” all the time (that’s his version of a meow, but also suits how amazed Colin often seems to be about life. This boy sure has made life interesting for all of us.

These cats are what we call "forever fosters". We don't usually have forever foster cats, but occasionally a special cat comes along who isn't really adoptable (due to illness, chronic condition, or even temperament), but they're still living life with gusto. These are our Forever Foster cats.
© 2018 Impound Feline Rescue. All Rights Reserved
Powered by WordPress