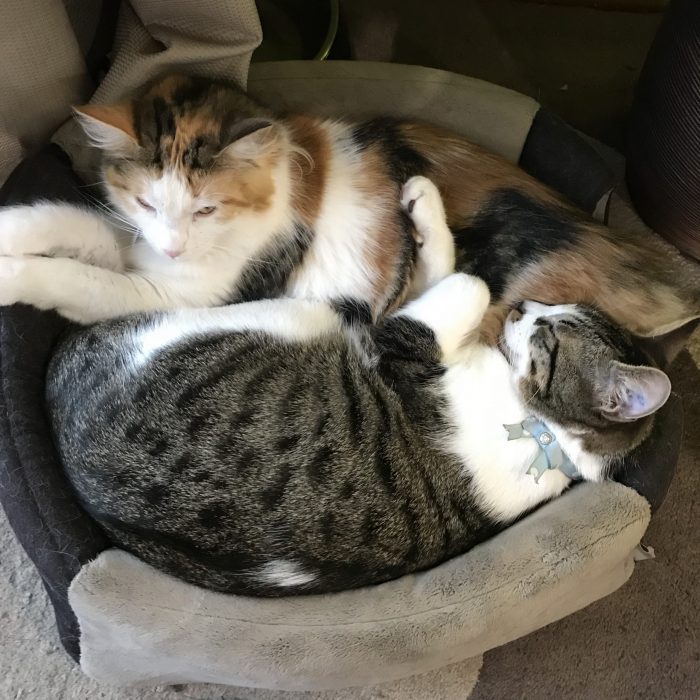 While browsing Facebook, I saw a photo of these two shy little kittens looking for their forever homes; a beautiful calico girl ‘Harlee’, and her sweet white-and-tabby brother, ‘Quinn’.

They were about 5 months old – the same age as our kitten, Balor, who’s playfulness was already overwhelming our other cat. We knew we needed to find a friend for him with energy to match, then we found these two!

They had a sad backstory – they were much smaller than normal for their age, likely due to past neglect, and were poorly socialised. In addition, they had a few minor medical issues which needed to be resolved before they could be adopted.

It took weeks of careful introductions, isolating the new kittens in a spare room, before everyone had adjusted enough to interact safely. Meanwhile, we had to catch them several times a day to medicate them!

We renamed Harlee ‘Athena’ and Quinn ‘Apollo’ because we felt it matched their personalities (and our theme of mythological naming).

Athena adored Balor from the beginning, following him everywhere and showering him with affection. Apollo took a while to stop growling at his new brother, but these days he is often found sleeping on TOP of Balor! Our ‘three musketeers’ as we call them are always getting into trouble together, when they aren’t sleeping in a pile or forming a ‘grooming triangle’. Our other cat, Gremory, finally plays chasey with Apollo and is steadily being won over by Athena’s sweet nature.

I call Apollo my ‘sugar-cube’, because he can be so over-indulgently sweet! He’ll follow me around to rub his cheeks on my face until I get sick of it!

We call Athena our marching band, or our bunny. She has a musical meow and she’ll walk around the house singing at dust motes and flying insects. Then when she’s kneading the blanket in the morning, she moves her paws so fast it’s like she’s marching on the spot! And when you pick her up, she curls up and tucks her legs in, looking something like a bunny (with short ears).

They are a work in progress, but these cats mean so much to us and we’d do anything to give them the very best.