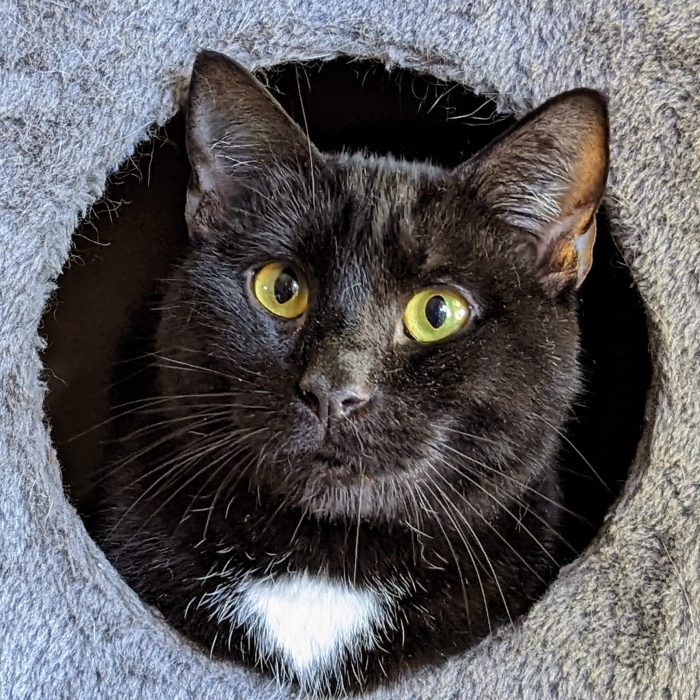 Raoul is a shiny black cat with stunning green eyes and a triangle white dash on his chest.

Raoul was rescued from the pound in Aug 2021. Sadly no foster carers were able to take him so he stayed at a cattery until May 2022. Over time in the cattery he became quite social. Once you gain his trust he’s a lover. He enjoys the company of people and seeks it out even though it can be really scary for him. Other cats relax him and have helped to bring him out of his shell.

Once Raoul is confident you’re not going to put him in a pie he will open up to you. He really likes to be around people, even if he’s just in the same room, he likes to know what’s going on. He enjoys head rubs, pats and treats. Raoul is a lap cat but is also happy to snuggle up next to you. He likes to play both with his toys and with his foster brother. He hasn’t had any experience with dogs as yet.

Raoul will be shy and hesitant at first. He will want as much encouragement as you are prepared to give him, so a quiet home without children will be ideal for him.

Raoul would like to be part of a quiet home with humans that know cats well. He really enjoys the company of others cats and would be happiest in a home with other feline companions. He likes to be around people so would be ideal for someone that works from home. He is pretty low maintenance so would also be chilled if his people were at work all day.

Raoul has mild allergies which present themselves as sneezing. He would be best suited in a clean home where there are minimal carpets and soft furnishing because of this.