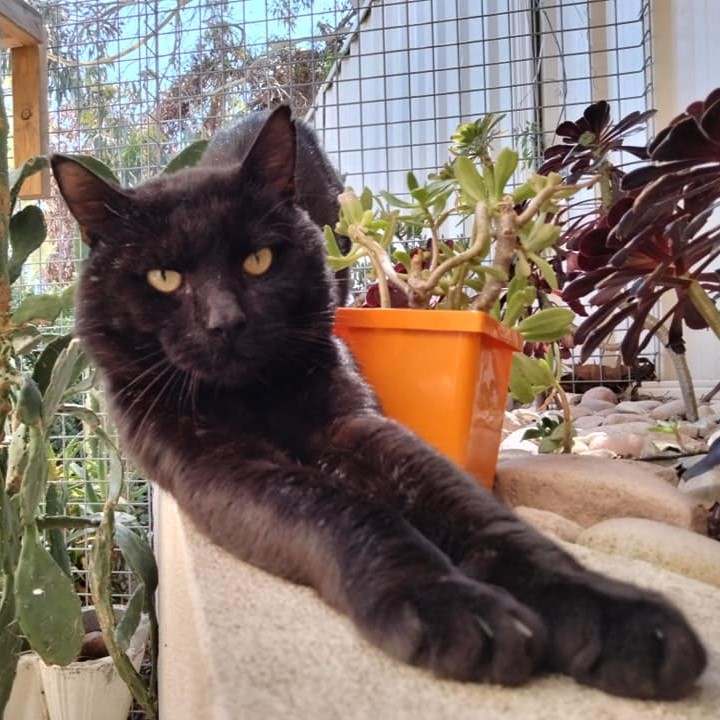 Lewis is an all-black male cat with an old wound on his head which is healing nicely. He clearly has battle scars when you look at him, as you can see the furless bits amongst his fur. His coat is getting more soft and healthy the longer he’s in foster care.

Lewis was quite scared in the pound and he got steadily more scared as time has gone on. Since coming out of the pound (it was a slight struggle to get him out!) on Oct 25th he has already started to calm down and has been handled.

In his current foster home he is now out and about amongst the other resident cats, though there were some run-ins now and then as he tried to get them to accept him. Now the tables have turned slightly, and Lewis spends a lot of time hissing at the other cats as he feels threatened by them. Things are slowly settling down but still with the occasional spat.

Lewis has accepted pats from his foster carer and quite enjoys a brush, if it’s done carefully and he’s not sneaked up on.

For now the main thing we know about Lewis is that he really enjoys food time and doesn’t complain when he’s given two (or more) meals in a row. He seems to be quite interested in the other cats and would like to be their friend – but when he’s hissed at and intimidated, he will hiss and swipe back. He has taken it upon himself to be the main hisser in the house now, because others have pushed him too far.

His foster carer recently brought home some fresh squishy puffs (cat nip toys) and Lewis really enjoyed rolling around with one of them.

Lewis is currently wary of his human, although he’s accepted pats now. He is also wary of brooms and dustpans, and sudden movements in general. It wouldn’t surprise us if he had been hurt by some or all of those things in the past, but he’s clearly also been around some nice people at some point, since he’s adapting fast to human company.

Lewis will need a home with patient people who aren’t too loud. A calm home would be nice for him. His foster carer suspects he may be happiest as an only cat, or at least in a home with other cats who are not at all fazed by other felines being around. He wanted to be friends with the other cats in his foster home at first, but after a nasty reception by some, he isn’t so sure anymore. Whichever home he ends up in, he needs to be with people who are patient and will leave him be when he wants it, but will be confident in giving him pats and brushes.

We know that Lewis is FIV+, and his short-haired coat is quite rough, though it’s improving with near-daily brushes. He looks like he’s been through the wars. Overall he seems to be in decent health, but he does have a tooth that needs to be extracted, which IFR will do for him in the near future.