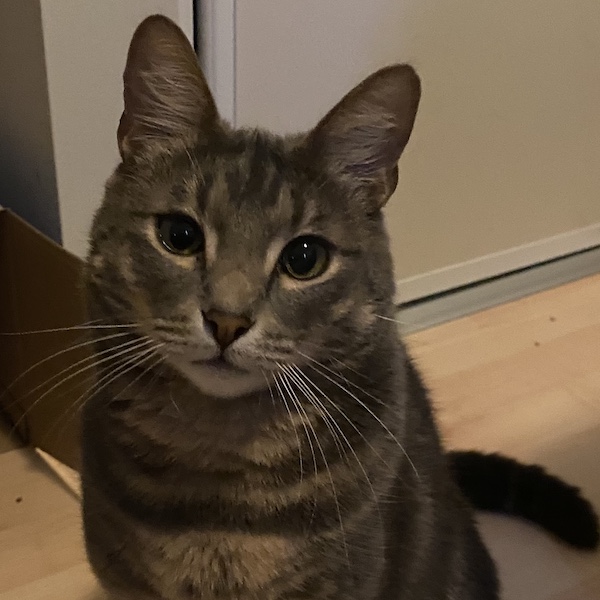 Duncan is a domestic short hair blue cream tabby with some of the softest fur you will ever feel.

Duncan was trapped at a house after his previous owners left him behind, and consequently ended up in the pound. He has had two previous foster homes where he has been very happy and loved, but seemed to be yearning the friendship of other cats who he could call his mates.

Duncan is very shy at first, preferring to hide under his blanket. But once you start to come in and peer underneath and see his sweet face peek out and hear his gentle purrs, you know he’s starting to build trust in you. One of the first nights I laid down on the floor with him, I was crying and upset about the recent passing of my beloved old girl, so I told Duncan all about her. He put his paw out on my hand and started to purr. I had never heard him purr before. I would visit him daily under that blanket and was always greeted with purrs and grateful rubs on his chin.

After a gradual introduction to the other cats in the family, he just blossomed. From shy boy, to sassy, playful, sweet dude. He loves to talk to you. He makes the cutest noises throughout the day, little chirps, brrrrips and happy meow-meows. He would cry out sometimes when he first arrived, but now he has confidence, he hasn’t since.

He loves to play! Wether it’s chasing his wiggle wand, a robust game of chasey with the other cats, or independent play with his balls and tinkle toys. He’s quite nocturnal, I sometimes hear his quiet scurrying during the night, and find him curled up on the bed with me most mornings.

He loves Dine Creamy Treats hand fed from the tube. It’s a great way to earn his trust, he likes fish flavours.

He’s fond of his blue blanket, especially at first to provide cover and security.

He likes to window gaze and sniff the outside air.

Loud noises (eg. Loud TV or music), being picked up. He gets quite scared of brooms sometimes if he sees you with one unexpectedly.

He would do well with one or more playmates. He will need kind and patient people who know cats and will give him love and attention as he settles. He may take a little longer for him to settle than the average cat, but the end results are so very worth it. No children or dogs, it will freak meow-out!

Duncan is a healthy boy who is really getting used to the indoor boy life!