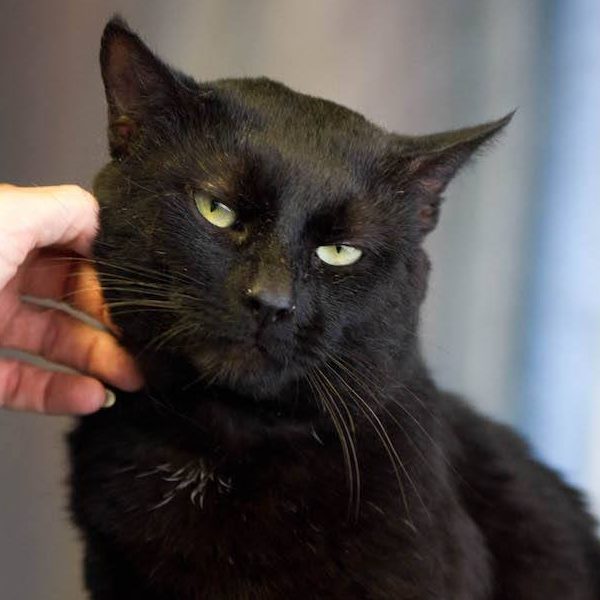 Dante was a beautiful black boy who came to the rescue as an ex-abused cat. He had been kicked around and used as a “play thing” for his former family’s dog. You could tell that he didn’t trust, and biting was a way of defending himself. He was also desperate about food, biting and scratching at first as he was waiting for his bowl to be set down. This behaviour calmed down over time as he realised he wasn’t going to go without.

He didn’t like being patted below his head and neck at first, but allowed it more as time went on. He also bit less often, and wormed his way into my heart more thoroughly! While he started out extremely quiet, watchful and wary of his environment, over time his true chatty nature revealed itself (his meow was not quiet!).

Dante was a magnificent, robust and silky beast who liked to sit on my lap and headbump me backwards (if that makes sense??). People kept telling me to keep him, and though my heart broke at the idea of saying goodbye, I knew the right home was out there for him.

He eventually found a lovely home with kids and adults of varying ages who had a lot of love to give him. He settled remarkably quickly, and so I felt at ease with leaving him there. My home felt very empty without him, but that’s what you get as a foster carer!

Tags: 2015, a cat story, adopted black, adult, fiv positive, male, pound
These cats are now adopted. If you are an adopter and can't find your IFR kitty here, get in touch so we can add a post about them! Also, if you aren't already in our Facebook group for adopted families, we'd love to have you there. Just ask us for more details!
© 2018 Impound Feline Rescue. All Rights Reserved
Powered by WordPress